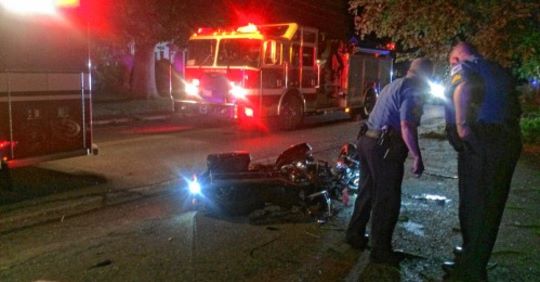 In late July, I returned home from a visit to my family in New Hampshire on a Tuesday night. I had work to do. I chose to do it while sitting on my bed, situated in the back of my house, rather than in my office, on the front.

Kind of a mundane decision, right? That night, it meant my housemate and I watched a man die in our driveway.

I settled onto my bed about 9 p.m. on July 24, simply to start weeding through the email that had accumulated in my inbox in the four or five days I’d been away. It was a warm night, as all nights were this summer. My windows were cranked wide open.

At 9:13 p.m., I heard the sound of a motorcycle accelerating. Not unusual on my street. But then it was closer. Louder. Then the grating, terrifying sound of metal on metal. Then, silence. This is a sound I never would have heard from my office desk.

“Craig!” I hollered downstairs. “Did you hear that?? Someone is hurt. We need to get out there.”

I was not sure.

I ran through the kitchen and out onto my back deck. “Can I do this?”

That’s when I saw that my car and Craig’s, normally parked parallel to one another, were perpendicular; Craig’s car had slammed into mine. In that moment, I realized whatever had happened had happened in our driveway.

“There’s a man in our driveway,” Craig yelled to me as he ran from the far side of our vehicles toward me, toward the house. “Call 911. He’s hurt bad.”

“I have the Easthampton police on the phone,” I said. We headed back into the driveway together. I began a dialogue with the dispatcher.

“There’s been a motorcycle accident at my house,” I said. “There is a man, lying on his side in my driveway.”

He was next to what had once been a motorcycle. It had no wheels; it was metal parts on the ground. I ran to him, unaware at the time that my mind had stopped asking, “Can I do this?” It was just doing it instead.

“Sir,” I said as I squatted down. I touched his left shoulder. “Are you okay?” Clearly, the answer was “no.”

To the dispatcher I said, “There is a lot of blood. The driver is a man. He is critically injured. He’s unconscious but breathing,” I said. “Please hurry. Please hurry.” I don’t know how many times I said it.

To the motorcyclist, who I will call TJ, I said, “You are okay. You are not alone. My friend and I are right here with you. The police are on their way. Please stay with us. There are people coming who will help you.”

I watch a lot of crime shows. I said what I have heard cops say. It came out in a long monologue, which I delivered while holding TJ in my arms. I was bent over him, my mouth near his face, my left arm resting lightly on his chest. In those moments, I felt it was my responsibility to save his life. And I thought that I could.

I do believe now the words were some sort of comfort to TJ. His breathing was labored but steady. He was not able to speak to me, but I had the deep and distinct sense that he was aware of my presence and understood what I was saying.

Over and over, I said, “You are going to be okay. Stick with me.” At one point, I praised him for wearing a helmet. “It might have saved your life,” I told him.

It seemed like an eternity, but I suspect only five minutes passed before the police arrived. They joined me at TJ’s side but did not order me away. One of the officers asked TJ to squeeze his hand. There was no response.