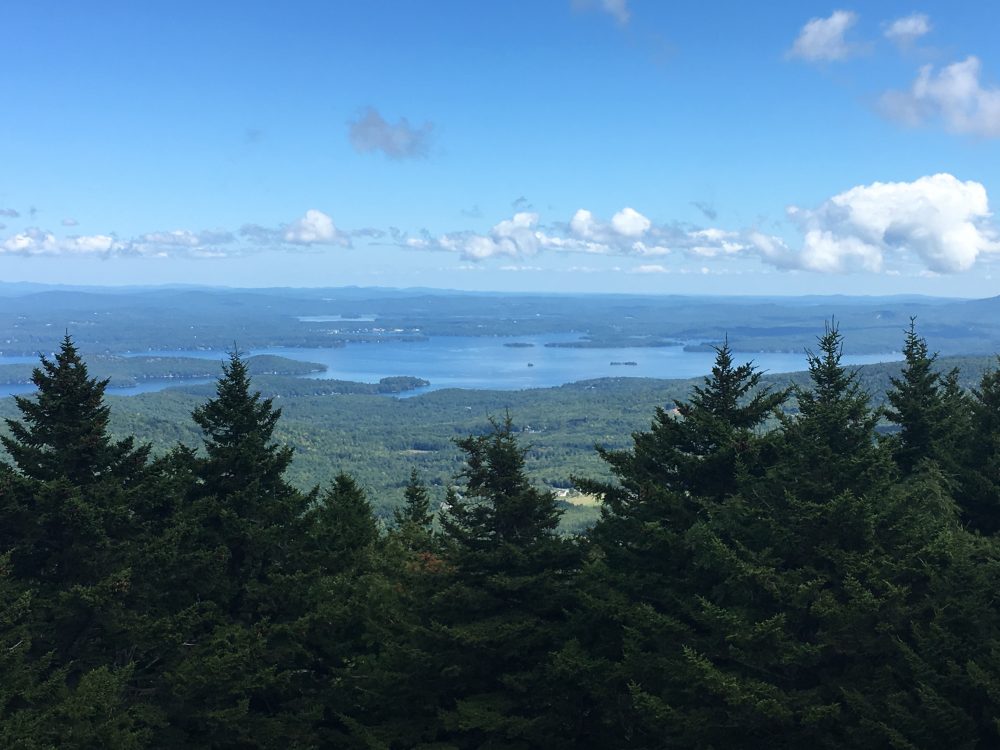 Jacques—the guy I met while online dating a year ago—has learned how to walk again.

Except for some residual pain he will likely feel for many months, he is a walking, working out, multi-tasking man with a foot-long scar to prove the hell he went through after a hiking accident last fall.

It begins on September 14, 2018—the eighth anniversary of Ed’s death, and Jacques’ last day with me on a vacation in the Lakes Region. We’d spent most of a week doing things like kayaking on Lake Winnipesaukee and biking in the White Mountains. On that day, we were hiking several peaks in Belknap County.

I was grateful at how rich and full my life was, and pleased I was not spending that warm, sunny day in a hospital room, taking care of someone. We were outside. The sun was shining.

After choosing a route I recommended against, because it is dull and far steeper than the woodsy trail, Jacques complained good-naturedly as we climbed. “This is fucking steep,” he said repeatedly.

“I need to learn to listen to you,” he said. (Foreshadowing, part one.)

On the roadway—which takes people who don’t want to hike up for a peek at the view—Jacques stopped a handful of times for a breath and wondered—a bit crankily—when we were going to find the summit.

Once at the top, though, we sat on warm rocks adjacent to a fire tower. Jacques took off his shoes. I rubbed his bare, white feet, thinking they were rather perfect. (Foreshadowing, part two.)

We drank some water, ate a protein bar, and shared a somewhat mushy Macintosh apple before we climbed the tower. Awed by the panoramic view of Lake Winnipesaukee and the White Mountains to the north and Lake Winnisquam to the south, we took photos, had a romantic moment, and got back on the trail.

After a half mile, we came to a crossroads.

“We could go back the way we came, here,” I told him, pointing to our left, “or, we could go that way and climb to the Gunstock summit.”

We found it easily. Soon, the descent was steep. Jacques took this as an invitation to run. It made me incredibly nervous. The terrain was rocky, mossy, and wet from all the rain we’d had in August and September.

I worried and fussed over him, but Jacques is like me, a bull in a China shop. Telling him to slow down was only going to make him more determined to move at his own quick pace. Secretly, I thought he wanted to take a turn at being the person in the lead. I let him have that privilege.

Ten minutes or so later, though, the trail got narrower and more challenging. Jacques continued to move at a blitz.

He laughed at me.

I didn’t take my eyes off Jacques as he ran down Gunstock Mountain.

I figured, if I watched over him well, he would be fine. I was wrong. Where the trail dipped ahead of me, Jacques slipped on a flat rock, pitched backwards, and then stumbled forward. I drew in my breath, releasing it when he did not fall and hit his head.

But then I saw Jacques was holding his right leg in his hand. He lowered himself to the ground and said, “Fuck. I think I broke it.”