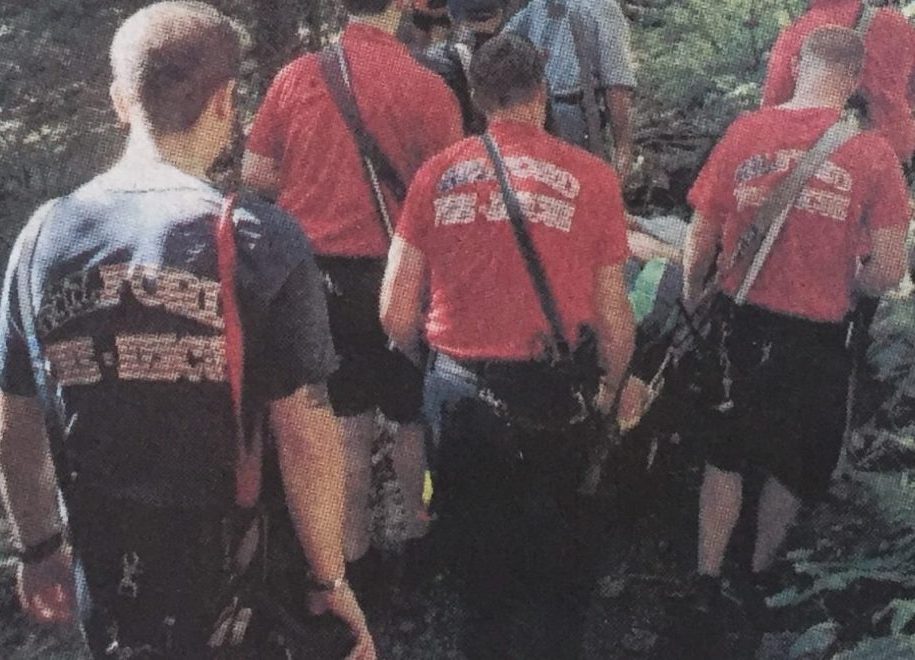 Grateful that Jacques had not split his head open and died, I ran to him. He was attempting to stand. “Lie down,” I said. “Lie down.”

He said when he slipped, his right foot jammed into another rock and twisted at an awkward angle. “I heard it snap, and when I lifted it up, it just hung there.” He moaned in pain. I was panicked. There was no sign of another human. How were we going to get down the mountain?

At that moment, a woman emerged, ascending. “Are you okay?” she asked.

Because I wasn’t sure which pocket of my backpack contained my cell phone, I said, “Yes, could you please dial 911?”

As she dialed, I was aware that Jacques and I continued taking turns saying, “Fuck” repeatedly, as an exclamation. Once the woman had a dispatcher on the line, she handed her phone to me, and I provided information about Jacques’ injury and how to find us.

Only 18 minutes passed before an EMT was standing above us, asking Jacques questions, the first being “Do you want some pain medication?” Jacques did not.

The EMT, from the Gilford Fire Department, splinted Jacques’ leg and told us that the rest of the team would arrive shortly. He described the apparatus they would use to get Jacques down the mountain.

There were nine rescuers in all, and they came with a stretcher that was mounted on one large tire—like a unicycle with a bed on it instead of a bike seat. They lifted Jacques into this vessel, strapped him in, and then each of the rescuers threw a canvas strap over a shoulder; this allowed them to hold the stretcher steady.

I threw the first EMTs equipment bag over my shoulder along with Jacques’ backpack, and I walked down ahead of the team, afraid to get in the way. I stopped every few minutes and turned to watch the painfully slow procedure of guiding the sled down the hill, over clusters or rock and down steep sections. I was focused on Jacques, gauging his state of mind and was generally pleased to hear him carrying on conversation with the team, as if they were out in a bar shooting the shit.

It took just over an hour to descend what I believe was about a half mile of trail. An ambulance, and several other firefighters, were waiting at the bottom to whisk Jacques off to Lakes Region General Hospital. They offered him pain medication again, and, again, he declined.

I kissed him, told the EMTs to take good care of him, and hurried to Jacques’ car so I could drive to the hospital emergency room. I was weeping because I hated the separation, not being able to monitor his well-being. The irony of the situation also had not escaped me: On the anniversary of Ed’s death, I was to find myself in a hospital after all.

On the first sunny afternoon of our vacation, also our last night together, Jacques and I spent four hours in the emergency room, where he passed up pain medication for a third time. He never lost his good humor or affable nature. He was cooperative, fun, accepting of the situation.

The doctor told Jacques he had a spiral fracture in his fibula and said it was also likely he would need surgery. The day was the beginning of a long battle for Jacques, who couldn’t walk, cook, drive, visit his gym, or experience any kind of independence for three solid months.

He handled it with equal parts grace, humor, and frustration. That’s my kind of guy.