You are here: Home / All / Becoming an Actual Biker Chick 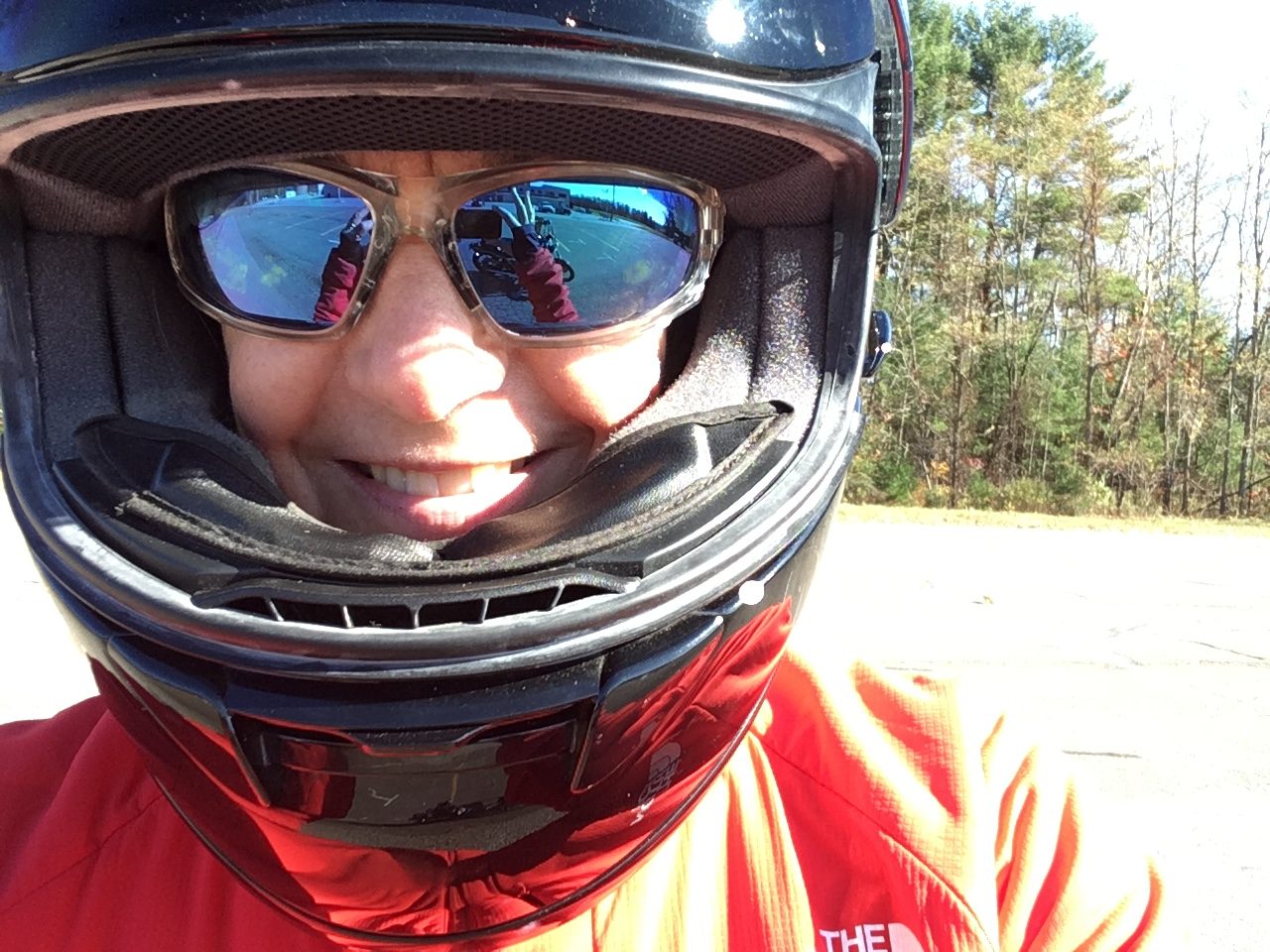 As I have been reaching outside my comfort zone to experience things that had once terrified me—such as the zip line and tree-top adventures I did last summer—I am learning how to let go of fear. It was the realization that I could let go—coupled with the comfort I felt on my bicycle on our recent trip across Austria—that put the seed in my mind that I might like to get licensed to ride a motorcycle.

Jacques has been riding a bike for years and owns a blue, limited edition 2018 Indian Chieftain. Over the summer, he bought a sissy bar for the back so that I might start to ride with him. Without saying so to him, I got to thinking I’d rather ride behind or beside him, on my own bike.

I decided it would be a great birthday surprise. I’d take a few classes, get my license, buy a bike, and astound Jacques on April 3, 2020, by driving in the driveway on my own Indian Scout. My kids and Jacques’ were in on my little secret.

I took my first class in late October at a training facility in Westfield, 10 minutes from home. I’d purchased a pair of black, Harley Davidson riding boots that made me feel like a badass, and I’d sneaked a full-face helmet and some riding gloves out of Jacques’ garage.

On the day of the lesson, I arrived early at the training center to get a feel for things. I was panicked and wanted to talk with Jacques; because I couldn’t, I recorded myself babbling about my anxieties as I waited for the instructor to show up.

“I’m not worried I’m going to get hurt,” I said in this message I intended to play for Jacques in April. “I’m worried I’ll looking like a freaking idiot or do something stupid, like dump the bike!”

I had Googled “Women learning to ride motorcyles” and watched several videos in which women had a first lesson, all of them taught by their boyfriends. One had dumped her boyfriend’s bike, tipping herself over and laying the bike out flat, in the first five minutes. I tried to have a different vision for how my lesson would go.

But as I waited outside the training center on Friday, October 11, 2019, my heart was racing. I counted the minutes until the lesson was to start at 4:45 p.m..

At 4:44, I was perplexed, as the door of the training facility was still locked, and there was no one to be seen. At 4:50, I had passed into annoyance. I called the number on the door. I paced. I called again and left a message. Then I forwarded the confirmation email with that day’s date and the lesson time to the head of the school and said I was confused. Then I left, with no release for my nervous energy. I ranted to myself in the car on the way home.

A day later, the owner responded that she had written my appointment down on the wrong date. Sigh. I was resigned to show up on October 18, an hour earlier to account for daylight saving time. So, a week later, I repeated all my stealth moves, securing the gloves and helmet from the garage, and, again, the instructor wasn’t there at the appointed time.

He showed up 20 minutes late, explaining his first language wasn’t English but Spanish. He thought “20 of 4” meant 4:20. He was kind and apologetic, and I forgave him easily.

Also, it helped that Jose was my kind of instructor. We started inside with a book, and he taught me how the clutch works, what all the features were—front and rear brakes, speedometer, fuel switch, on/off switch, ignition, etc. Then, he threw the book on a table and said, “Forget the book. Let’s just go ride.”

In 15 minutes, I was doing circles in a plaza parking lot in first gear, going about 10 or 15 miles an hour, and I was elated. Inside my head, I was making a high-pitched noise my friend’s mom often made, which sounds like, “Eeeeeeeeeeeh!”

Then, an instructor leading a more advanced lesson in the classroom came running out. She said something to Jose, and he called me over to him.

“I’m not supposed to let you ride,” he told me.

For the next 30 minutes, I was constrained only to practicing clutching—starting out in first gear, gaining momentum and then stopping. My rational brain knew this was a good technique to master, yet my adventuring self wanted to keep speeding around the parking lot.

By the end of the lesson, I knew one thing: I wanted to take the weekend-long class.