You are here: Home / Adventures / Banana Farmer in Training 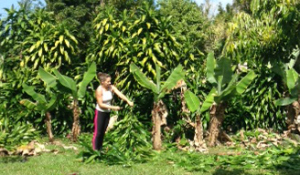 Note: This is the fourth of fourteen parts. Click here to read from the beginning.

I paid careful attention to my lesson with Keith in using the machete and Japanese sickle. He showed me several techniques he uses in working with each. I asked if I could practice while he watched, and he offered corrections and gave me new ideas to try.

It was an impromptu tutorial held after a breakfast of fruit salad and banana bread. I was wearing a polyester dress and sandals, but this was the moment I had for learning, and I went with it. We worked quietly together for about 20 minutes, hacking down Ti plants and cutting leaves off their main stalks, which Keith said would nearly instantly breed new life if left in a compost. He asked me to create a pile of stalks that would later get hauled away.

We had to quit when it was time to take our friends to the airport. For the next few days, I thought incessantly about my new skills, waiting for the moment when I could wield the sickle on my own. That moment came last Wednesday.

Over my morning coffee, I looked out the window, identifying banana trees closest to the farm that needed trimming. After a grueling run with Molly, I retrieved the sickle from the basement, leaving the machete behind; honestly, I don’t really trust myself with that yet. I have some healthy respect for the tool—and my limitations in using it—and, well, I like my feet.

I am a bit of a bull in a China shop, you see. I have sliced open my ankles while shelling with a metal basket in Sanibel and by letting my power hedge trimmer swing down and dangle at my side. No telling how many limbs I could detach with a machete.

Once I was standing beside the banana trees, I noticed they were surrounded by thick and inhabited spider webs. Keith had told me the spiders are harmless here but to beware of centipedes whose bites can feel like a gunshot. He also said he has only seen one in his years here.

No one mentioned the need to protect the spiders, so I found a metal rake in the open-air basement and eradicated all the webs in my way, as I didn’t want them in my face, mouth or hair. I hoped they were not a critical part of the ecosystem that everyone forgot to mention.

Then I started hacking away at dead banana leaves with swift, purposeful downward sickle motions, just like Keith taught me. It was intensely satisfying. I left the fronds underneath the trees as he said they make good mulch.

I raked other debris into the compost pile, and as I did, large chunks of volcanic rock were carried by the rake into the pile as well. Suddenly it became clear why it would not be a good idea for me to mow here!

On Christmas Eve Day, I had time to tackle a larger project that Keith had given me—again pruning dead banana leaves on another section of the property and clearing out some invasive Ti plants. It took several hours under the hot sun, and I could not have been happier. When again will I have the chance to feel like a jungle farmer in the dead of winter?

Seize the day, as they say.