You are here: Home / All / Author to Read April 25 in Northampton 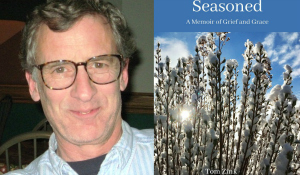 For roughly 20 years, Tom Zink and I were members of St. John’s Episcopal Church in Northampton. He was the guy who led the morning music program for the children. Like me, he was apt to be setting up chairs and working at various pot lucks when our children were small. But I never got to know Tom outside of church.

In 2006, Tom and his wife, Beth Hewson, moved to Ontario, Canada. If he hadn’t written a book about the death of his brother as a teenager and asked me to edit it for him, I would know him even less now than I did 15 years ago. Instead, I feel very connected to Tom. I’m excited that his memoir, Seasoned: A Memoir of Grief and Grace has been printed. And I’ll be front and center at his first reading at St. John’s on Tuesday, April 25 at 7 p.m.

I feel the kinship with Tom on several levels. I understand his pride and his anxiety in the fact that people will now be able to read his book. I felt the same way when Divine Renovations came out, and I started taking it out in the world.

I also feel a deep connection to Tom’s story of loss. His brother Steve was hit by a car and killed while both boys were doing their paper routes. Steve was 15. Tom was 14. As his family buried their son and brother, they also buried their grief.

I empathize and understand the quiet mourning because my parents also lost a son. My brother Johnny died of leukemia at 10 years old, before I was born. I came around three years later and somehow, even though we didn’t talk about Johnny much, I still felt the loss growing up.

There is a scene in Tom’s book when his family visits his brother Steve’s grave, and they, at first, can’t find it as the grass has covered the gravestone. It reminded me of the first and only trip I made to my own brother’s grave in 2007. I was alone. I couldn’t find the marker, and I became hysterical. I still cannot get over how much I cried—after I did find it—as I sat there talking to a brother I had never met.

I first read Tom’s manuscript a year ago. We have worked together since then to tighten and trim the book, and when it was ready, we turned it over to Maureen Scanlon of The Creative, and she designed the cover and insides, and brought it to life.

I communicated with Tom via Skype and email. My role in readying the manuscript was to make it more powerful and a little less personal. I remember telling Tom in that early phase to think of the book as if it were a family photo album. Together, we worked to remove images that were redundant, to add shots that brought new layers and voices into the story and to bring some images into better focus.

Tom greatly appreciated this work. In his acknowledgements at the back of the book, Tom says, “The skill, sensitivity, and professionalism of my editor, Janice Beetle, are gifts that helped to sharpen, shorten, and sweeten the narrative. Her challenge to go deeper into early interactions with Steve led me to new understandings I had never before considered.”

I’m very proud of those words, and I’m very proud of Tom. His book is a poignant story that anyone who grew up in a family will appreciate. Seasoned is not just a story of grief and recovery. It is also a tender and lighthearted look at humor and laughter, winning and losing, and doubt and faith. It’s a book about family, fun, laughter and love.

Please join me at Tom’s reading on April 25. Hear him tell his story and buy a book! Proceeds from the sales will benefit the Stephen A. Zink Scholarship fund at Steve’s alma mater, Lutheran High School West in Rocky River, Ohio.