You are here: Home / All / Author Lisa Taylor’s Tips for Writers 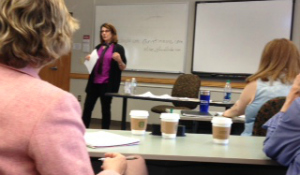 Note: This is the sixth of six parts. Click here to read from the beginning.

In “Liars, Criminals, and Lovers: The World of the Story/Fiction 101,” author Lisa C. Taylor encouraged writers to seek out the flaws in their characters and embrace them, emphasizing that patience is a critical part of writing a story.

She had many tips, in fact, for us would-be writers in the audience. Here are some of her pointers:

Writing a good story takes a little more than just a good circumstance for your character to fall into, however, and the way the story is told is the means to how the reader will ultimately react.

Lisa said a few good things to keep in mind while writing are the word choices made (conveying attitude), the white space (what is left unsaid), the sound, voice, or tone that is implied, and the syntax and word order. It’s a lot to consider, but nevertheless significant to a brilliant piece of written work.

According to Lisa, good writing often has the following: