You are here: Home / All / A Tour Through Hell 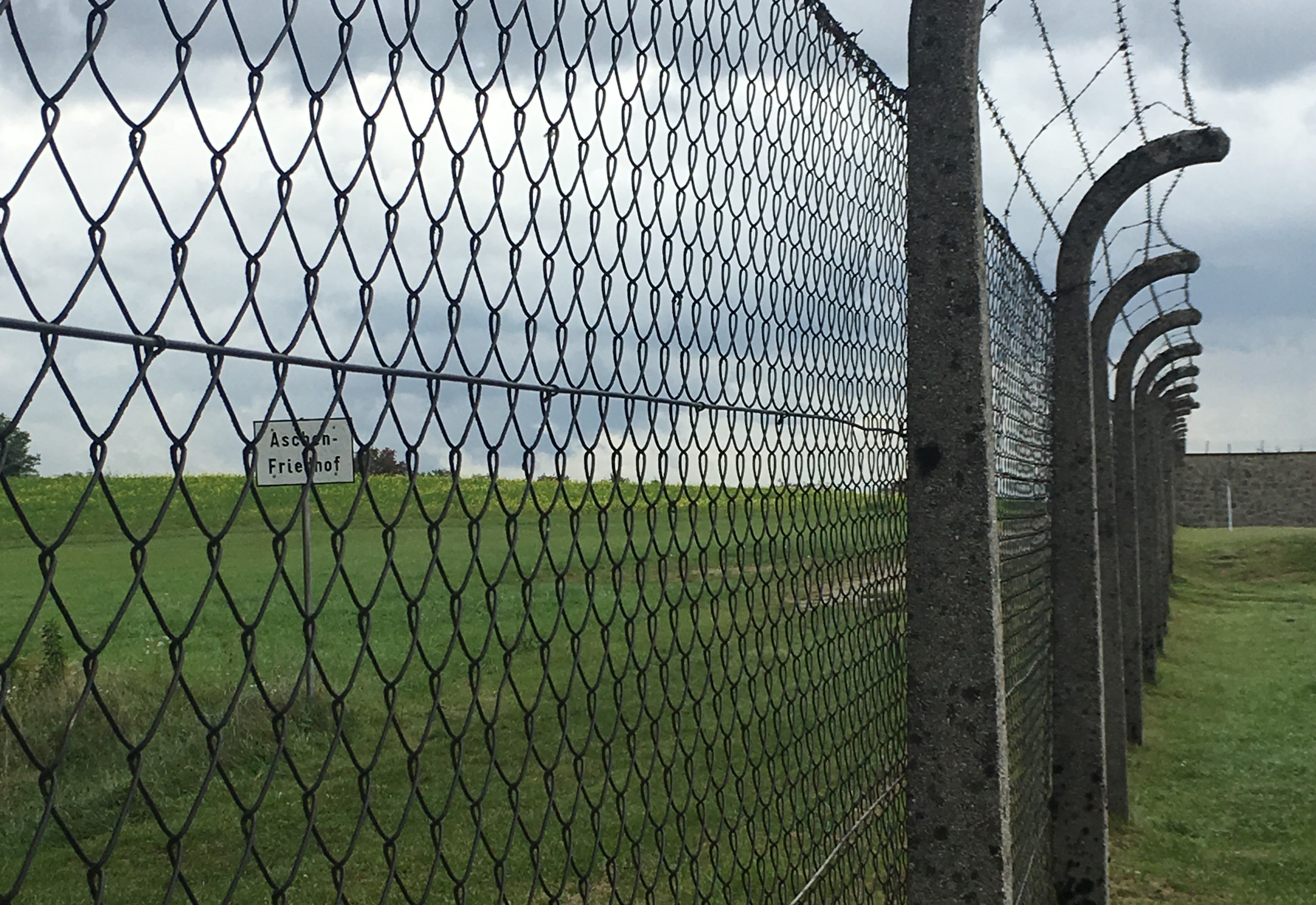 Each day on our bike journey, we were intentional about finding the interesting spots along the route to our next destination. Sometimes the stops were planned in advance; sometimes, we passed something irresistible and had to explore.

The side trip that made the biggest impression on us, though, was a visit to Mauthausen, once a concentration camp. This memorial / museum was on our trek between Linz and Ardagger and was a planned stop. What we saw and learned was physically painful, beginning with the steep ride about a mile uphill to get there.

My lungs were exploding and my thighs raging when Mauthausen first came into my view. It was imposing, stone, cold, gray. Instantly, I felt it was appropriate to be struggling as I was. I reasoned that I was paying a debt to those who came here before us.

Inside the visitor’s center, Jacques and I paid a few dollars for the headsets that held information, the stories of this dark and dangerous place.

The tour began outside; we took it in solitude, each of us holding a headset to one ear. I have read about the Holocaust extensively, but covering the perimeter of the camp, I learned appalling things I did not already know.

Over 40,000 people had died here—people from over 40 different countries. Guards played games on an athletic field, laughing and enjoying themselves roughly 100 feet away from an infirmary in which prisoners who were critically ill lay dying, without medical care that might have saved their lives.

These same guards habitually shoved prisoners from the top of the hill down to their deaths in the rocky quarry below, later reporting these incidents as suicides and joking to one another about that day’s “Parachuters.”

Just inside the imposing gates, Jacques and I saw the outdoor area where prisoners were stripped of their belongings; later, they were also stripped of their clothing. Guards buzzed their hair and searched their bodies for hidden treasures, and for lice.

Inside the barracks—built to house hundreds and into which thousands were crammed—I felt the fear, the longing, the sickness, the hunger. I fled to the outdoors. I wanted to run to Jacques, a ways ahead of me, and cry on his broad shoulders.

Instead, I kept going, walking through a field just outside a series of barracks, admiring the sprawling meadow on the other side of the barbed wire. I imagined how it must have felt to see that view of freedom and not be able to grasp it. It was here I learned that guards routinely forced prisoners at gun point to run at the electric fence, throwing themselves upon it.

Often, death was not instant, my impassive narrator told me. Often, it could take a full day for a prisoner to slowly burn to death, enmeshed on the wire. Tears pooled in my eyes. How do you unlisten? Unlearn?

We walked through a field, where prisoners who were already dead when allied forces came to free them are buried. Here we heard the story of the prisoners who boldly escaped one night. (Watch my Facebook page in the coming days to hear this tale and others.)

Inside the compound that once housed everything from the showers where prisoners were forced to bathe upon arrival to the faux showers where they were brought to death, dozens of museum displays are installed. Information was abundant—everything from maps showing where prisoners came from, to individual stories of prisoners and guards, to artifacts, including charcoal and pencil sketches depicting the terror that was Mauthausen.

The exhibits continued downstairs in the basement. Large photographs of the compound were displayed with more horrific stories. Signage directed visitors into a room at the far end.

I sucked in my breath after passing through the two, large double doors and coming face to face with two crematories, their heavy wrought iron doors gaping open for viewing. I pushed myself forward, into the room where prisoners met freedom through death. Photos and other memorials hung on the walls, gifts from families and friends.

The names of all 40,000 prisoners were also on display here, in a hefty book at either end of the room; they also were etched into an elaborate glass memorial that snaked through this hell, occupying most of the space, save for a narrow aisle in which visitors could meander through.

So many white names, blurring one into the other, each one its own gruesome tale.

I saw my brother Jeff in here; I wanted to run to him, too. Fall to my knees. Instead, I escaped, because I could.

Our group of 16 gathered in silence at the row of bike racks. My brother Allan outlined the plan; we mounted our bikes and left, feeling traumatized and helpless, silently paying homage to those who suffered.