You are here: Home / All / A Short Piece About Procrastination 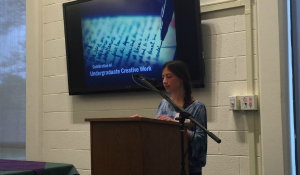 I wrote this piece of nonfiction in response to a prompt for a course assignment, having to write in a journal-like format. I spent too long staring at a blank page, thinking, pondering, and struggling with what to write. Then, all of a sudden, it hit me like a light bulb flashing above my head. Duh, start there. So I did. And I was surprised with what happened afterwards.

On Friday, May 6th, 2016, I read this piece as part of the Celebration of Undergraduate Research and Creative Work at Westfield State University. I was honored to read beside great poets and authors of prose to the small audience of all ages in the Ely Library Emilee Dawn Gagnon Event Space. It was also published in Westfield State’s literary magazine, Persona.

7:36. I have this bad habit of checking my phone between thinking. There really is no reason to since nothing has changed since I last checked it. It’s just something to do with my fingers, to keep them moving, to never have a moment of nothingness. I’ve always been fidgety. It’s difficult to be motionless. I could never be one of the Queen’s guardsmen.

I refuse to check my phone again. Don’t want to keep succumbing to mindless and trivial matters. So I tap at the letters, questioning myself on what I want to write again. Freewriting has never been easy with me. I’m not good at being honest, even with myself, whether it be on a piece of paper or a computer screen that no one will ever see except me. (If I even choose to look at it again.) I’m uncomfortable with sharing things outside of my head. It isn’t unusual, I feel, until it comes to the matter that even when I was a child and attempted to keep a diary, I wouldn’t be honest with my own thoughts and feelings. Even the one with the lock and key.

My childhood diaries never made it past three entries. I would explain mundane, irrelevant things, never anything of significance. I would rather turn over matters in my mind, whirling over the troubles and secrets and emotions that were bottled up inside, until maybe some light shone through the clouds. My mind would never allow my hand to express them. It held on tight to them like precious stones.

I had even attempted keeping travel journals during my college adventures abroad. It wasn’t easy when the journal entries were required and I was nowhere near honest when I knew someone else would be reading them. But when I attempted doing it on my own while studying abroad in Europe, I failed, quitting within a month of the project. It was too much effort to be honest with myself.

I wonder if I check my phone—7:45—to delay thinking, to procrastinate being honest. It’s the same as avoiding eye contact with that acquaintance you might know well enough to say hello to, but you would rather not. Often, I pretend to look at my phone between that awkward passing, even going to the extent, sometimes, to pretend to tap away at my screen.

I look around me, observing other people, yet seeing nothing all the same. I play with my hair, take a sip of water, all just to avoid the honesty. At least, on a computer screen, nothing is permanent, no truth is set in stone.