You are here: Home / Adventures / A Once-in-a-Lifetime Sight 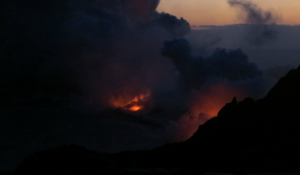 Note: This is the eighth of fourteen parts. Click here to read from the beginning.

The terrain heading into the lava viewing area in Kamokuna was a smooth yet dusty and rocky road, a residential road, if you can believe it. This area is called Lava Land by the locals. It covers several hundred miles that once housed a town and was home to 600 residences; it was all destroyed several years after the lava in the current eruption began flowing in 1983.

Molly and I were amazed to see that dozens of people have built homes in this wasteland, where residents live totally off the grid. It’s like living in a parking lot; there is no vegetation, except at the homes where residents have clearly planted coconut trees and other indigenous plants to focus on rejuvenation. The homes ranged from tin shanties to actual structures complete with front decks facing the sunset and boardwalks to their driveways.

Residents of Lava Land allow thrill-seekers like us to access their property from 3 to 9 p.m. daily to view the lava. Dozens of folks like us were on the road with us, on foot and on bikes. We’d considered renting bikes, but I pressed to walk as I thought it would feel more like an achievement. Some of the residents were selling water and fruit.

We had started out at 4:15 and expected to arrive about 5:30. We walked for 75 minutes, getting more animated as we got closer and closer to the plume of steam. We talked about what we might expect.

When we finally arrived, we saw about 100 or more people gathered on the cliffs facing the steam, all behind a set of ropes hung by the park rangers. We could only see steam, no lava. We were back much farther than we’d imagined and even though neither of us said so, we were disappointed with the sight before us. We complained about the rope; why was it so far?

We wiggled our way into the front row of viewers, just behind the rope, and sat on the volcanic rock, snapping pictures like everyone else.

“I sure hope something looks different after sunset,” I said to Molly, and she nodded.

Well before the glorious sunset that was also in store for us that night, we had our first inkling of what was to come, getting occasional peeks at bright orange lava bubbling into the cauldron of the sea every now and then.

“Whoa, did you see that?” I’d say to Molly as dozens of other voices uttered the same words around us. There were all kinds of oohs and aahs from a very quiet and respectable crowd.

As it got dark, the area of lava flow we were studying began to glow like a pit of embers; it bubbled and boiled and seemed like a living being, raging into the sea. You could clearly see the fiery lava flowing into the ocean at all times, and every now and again, molten flow was thrown into the air by the sea in great, glowing orange plumes that met the clouds of steam. The flow changed shape continuously, looking angry and blistering hot. It was incredible. We sat on our perches for about an hour, each snapping dozens of photos with my iPhone, a digital camera and Molly’s GoPro.

We headed back to the car about 7:15, jabbering continuously about what we’d seen and how awesome it was. We told each other the story of the one guy who crossed the rope line to get a better view and, in doing so, obstructed everyone else’s view.

“I can’t believe people threw stones at him,” Molly said.

“He was a stubborn guy,” I responded, as he’d refused to move even after people began pelting him with volcanic rocks.

Less than a week later, on New Year’s Eve day, Molly and I learned why the ropes were necessary. On that day, five other people crossed over the boundary and were called back to safety by a ranger only 15 minutes before the cliff collapsed at 2:45 sending showers of volcanic rock and gases into the air. The viewing area we were so lucky to see is now closed to the public indefinitely.

We are so lucky to have been able to see it. When we reached the car, we had that feeling I love so much—deeply satisfied, sore and bone-weary, hungry, exhausted to the core and completely elated to know we’d experienced the thrill of a lifetime, images we could forever carry with us.