You are here: Home / Adventures / A Massage in a Closet with an Uncloseted Masseuse 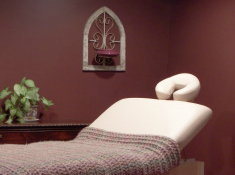 Note: This is the eleventh of fifteen parts. Click here to read from the beginning.

Even having a massage is an adventure in Majuro.

Just for fun, Molly and I scheduled hour-long sessions at a Marshallese salon, and we were given appointments at the same time, a week away. I had few expectations on the quality of an island spa experience, but one very sincere hope: that it would be as clean inside the salon as it was at the front desk and in the lobby.

On the appointed day—Wednesday, January 13—we returned to the shop and were not surprised that they seemed not to be expecting us; after all, the woman who took our reservations did not have the benefit of a calendar or a computer. This is the Majuro way.

“Oh, two of you?” the woman manning the front of the shop on this day said. “Today? Right now?”

“Yes, we have appointments,” we said.

“Ah, sorry,” she said. “One of you can go in. The other one must wait. One of our girls went out for a break. She be back in an hour.”

We agreed that I would go first, but when a second woman came out from the back—the woman who’d scheduled our appointments—she brought us both back with her. We simply followed. You get used to not knowing what will happen next around here, and you have to let go of any need to understand the game plan.

My wish for a clean space came true, but it was the smallest clean massage space I have ever seen; the massage table was in a room not much bigger than my coat closet back home, and the door was a beaded curtain. Molly had the other closet next door.

The woman told us to take our clothes off, lie down on our stomachs and wait. We could hear President Obama blaring loudly from the next room, giving his state of the union address. It impressed me that the Marshallese people had tuned into this, and I guessed they were watching it after the fact online.

Obama offered up the only background noise in the salon; there was no seascape-type music or other attempts at ambience.

Molly’s masseuse was the same girl who’d made our appointments and led us back here. Before she started Molly’s session, she told me, “Your girl be here in 10 minutes,” and indeed she was. When she arrived, she asked me, “Ma’am, light touch?”

I said, “Yes,” and that was that. After a short time, Obama stopped talking, and I enjoyed the silence and a typical massage, like the kind you might expect to have at home—except that each time the woman moved to a new place on my body, she had to slide the massage table a few inches across the floor so she could fit between it and the wall and still reach me. She also cracked the knuckles in my hands; that was different.

When I turned over onto my back, I opened my eyes and peered at my masseuse. She was a lovely Filipino girl. After a few minutes, she began to ask me questions. We talked about the fact that my daughter was in the next “closet,” and I asked her if she had children.

Turns out, she doesn’t because she is actually a man, and she prefers the company of men. This indeed makes procreation tough.

“Is this okay with you?” she asked.

“Sure,” I said. “I’m from Northampton, Massachusetts.” This geographical reference meant nothing to her, of course. So I said, “It’s very LGBT-friendly. The city has a crosswalk that is painted like a rainbow flag.”

I don’t think she knew what I was getting at, but she nodded.

Afterwards, we met Molly’s friend Emily for dinner at the Tide Table across the street; the Tide Table is the center of the earth on Majuro. Anyone who is anyone goes there.

After dinner, we went outside to finish our glasses of wine and were joined by the helicopter pilots who’d been sitting at the next table; some we had already met, some we were meeting for the first time.

By the end of the conversation, one of the pilots had offered to take a small group of us out to his Vietnamese-run fishing boat for helicopter rides. His name was Tom (false name; I’m protecting his identity because he did not get permission for this outing.) Tom said all he wanted was for one of us to bake him a cake. We made plans to meet the next day at 3:45 p.m.

Stay tuned to hear how it turned out!