You are here: Home / All / A Look at the Authors Featured in Mixed Words 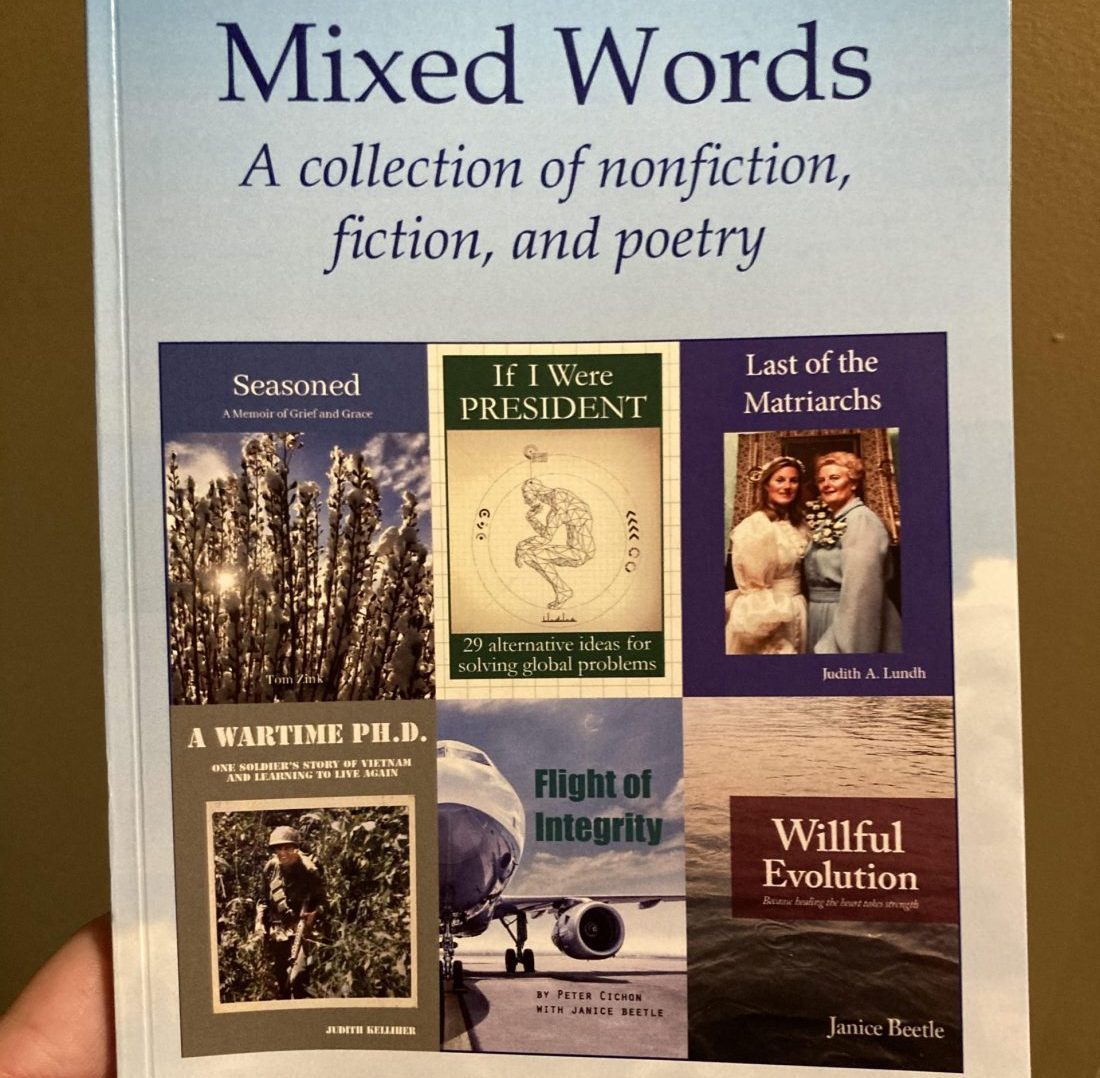 There are 10 authors featured in Mixed Words: A collection of nonfiction, fiction, and poetry, a book I’ve created as a fundraiser for a nonprofit that supports children and families. They are from Western Massachusetts, the Lakes Region of New Hampshire, and one from Canada.

Here is a closer look at each one and the books their work was excerpted from:

Thomas Zink, Seasoned: A Memoir of Grief and Grace, 2017

Tom Zink’s memoir tells the story of his unwitting grief journey of five decades that began when his older brother Steve was hit by a car and killed while on the paper route the two boys shared. But this is not merely a story of grief and recovery; it is also a poignant and, at times, humorous look at laughter and lightheartedness, winning and losing, and doubt and faith.

Vincent “Vinny” Valetutti, If I Were President: 29 alternative ideas for solving global problems, 2020

Over the years, Vincent “Vinny” Valetutti has conceived of many ideas and social solutions to global problems, but he has kept them mainly to himself. Thanks to Greta Thunberg, the young Swedish environmental activist, he was motivated to write his book. Vinny has no set agenda aside from bringing peace and unity. He is not a Democrat, Republican, or an Independent. He is a realist, and readers will find that his ideas fall to the left, right, and center. In If I Were President, Vinny presents twenty-nine concepts in these eight categories: Invitation to All World Leaders, Military, Constitutional Amendments, Capitalism, Social Issues, Energy Conservation and Environmental Protection, Health Care, and Patents.

Charlene Moses, A Soul in Bondage is Saved, a work in progress

Charlene Moses grew up in Massachusetts and Maine and experienced many traumas—as well as a constant series of moves—before she graduated from high school. She was lonely, shy, and insecure. As a private first class in the United States Marines, she was browbeaten by superiors and placed in an impossible situation. Her lack of self-esteem led her to make a decision she deeply regrets to this day. Her memoir tells the story of her childhood and the events for which she seeks forgiveness. She hopes her book will help others.

The Last of the Matriarchs is a book Judi A. Lundh wrote to honor her mother, Virginia, on Virginia’s ninetieth birthday in 2019. The story begins with Virginia meeting the man she would marry in the early 1940s and offers glimpses of special moments in Virginia’s life as a wife and mother—raising three daughters, working hard, spending time with her dear friend Eleanor. The book ends with a poem Judi penned, called “Sonnet of Love.”

Judith Kelliher, A Wartime PH.D.: One Soldier’s Story of Vietnam and Learning to Live Again, 2020

This book is based on interviews Judy Kelliher led with her brother Bobby, and it tells the story of Bobby’s two, back-to-back tours in Vietnam and his life after the war. Back at home, like so many veterans of the war, Bobby was anguished yet vacant, unable to feel or acknowledge his brokenness. Re-entry into marriage, children, and career became unmanageable as Bobby could not escape the horrors of his service. It would take the constant love of family and friends, and the support and guidance of strangers, to make him whole again.

Claire Hebert-Dow is at work on a memoir that offers a recap of her life adventures, told in part from multiple perspectives, including those of several beloved pets.

Janice Beetle, Divine Renovations: A Carpenter, His Soul Mate, and Their Story of Love and Loss, 2013

This is a personal story of love, loss, and faith. During a kitchen renovation, Janice Beetle unexpectedly met her soul mate, only to lose him eight years later to cancer. Divine Renovations offers a glimpse at the profound devastation grief causes, but it is also a story of hope.

Willful Evolution: Because healing the heart takes strength is a memoir that continues where Divine Renovations left off. Willful Evolution tells the story of the past ten years. After Janice Beetle was laid off from her job, and her beloved husband died four days later, she had to reinvent herself and grow up in many ways. This work of nonfiction will take you to places far away—such as the Marshall Islands, where Janice spent a month in 2015—and it looks at the importance of family, and that which is most important: loving yourself.

Decades ago, Peter Cichon spent countless hours daydreaming about leaving his trucking job behind to transition into a career at an airline. He worked sixty-five hours a week, living in his car on weekends, to make the transition in the early 1990s. His new career as a ramp agent exhilarated Peter and made him proud. He became a leader at his airline, where sexual harassment and racism were rampant. In addition to doing his job, Peter became a defender for colleagues who were beleaguered victims of a trio of aggressors. Standing against them was ultimately a major sacrifice. Flight of Integrity is a true story, based on fact.

JM Charles Merida, The 151, a work in progress

JM Charles Merida calls himself Chaz and describes himself this way on his Twitter page: “Published Writer, YouTubist, Actor, MBA, echnoGeek, F/Vlogger, Father, Brother, and Jedi Knight of the Order of Starfleet.” Charles had a dream in 2015 that inspired a trilogy of books. This excerpt is from the first book, called The 151.

In the poetry section at the end of the book, Charlene Moses and I both have samples. Some of Charlene’s are intended for adults and others for children.

All of my poems were written for children and were featured in Poem Pods.