You are here: Home / Adventures / A Day-Trip to the Island’s End 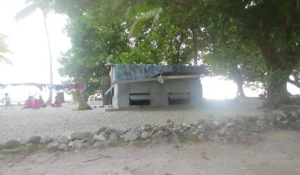 Note: This is the ninth of fifteen parts. Click here to read from the beginning.

Here’s a story I’ll put in the “You can’t make this shit up” category. It’s about my most memorable on-island adventure, to the southwest end, known as Laura, and it includes trash, fears of drowning and cockroaches.

We planned the trip on the spur of the moment one Saturday, and invited Molly’s friend Stephanie to come along with us. (An aside about Stephanie here. She is very cool, feisty and fun. The closest here to my age at 46, Stephanie spent the first 10 years after high school as a high diver in a circus, travelling around the world, and then got an education and accidentally landed a teaching job. She has since continued living globally in various short-term positions, the most recent of which is here at the cooperative school where Molly works.)

To get to Laura, the first order of business was to rent a car because it’s roughly an hour’s drive, and we wanted to avoid the stop-and-start of a taxi ride. (So, sorry, another aside here. This is how you rent a car on Majuro: You walk across the street to the Asian market, and through a take-out like window, you tell the owners you want a car, and when you plan to bring it back. They take your $25 and hand you the keys. No paperwork, no fuss. If you want to buy water or a snack at the market, you can do this as well. If you are lucky, as we were, they will tell you there is no gas in the car.)

The drive to Laura was very interesting. We crossed over the island’s only bridge, passed the dump and the airport and saw dozens of “country” homes—meaning houses much further apart and closer to the sea than in Molly’s area—as well as churches and a few food stands, one proclaiming “Popcorn, ice cream and wifi.”

When we arrived at Laura, I was shocked to see that the beach was literally covered with trash, so it was hard to imagine where one might sit. The tide was also very high. We had talked about snorkeling, but it looked a little scary to me. The coral reef was far off shore, and it looked rough out there.

I pushed myself out of my comfort zone, knowing I’d be disappointed if I didn’t at least try, and the three of us waded out together. When we hit chest-high water, we put our gear on and started to swim.

I was working my legs and kicking as hard as I possibly could, but I was still drifting in the opposite direction of the reef. I gave it about five minutes, and after drifting to a point where I was over my head, I realized I had better head back to shore, or I might end up several miles away on a different beach.

I signaled to Molly and Stephanie that I was returning, and began the fight to get to shore. This too was an effort, so I flipped on my back and gave it my all. When I could stand again, I removed my flippers and walked, but again, it was like walking in mud up to your chest. I was continually pushed backward and tossed to my left in a serious effort. I was glad to see, about five minutes later, that Molly and Stephanie had also called it quits and were headed my way, equally as slowly.

Back on land, we walked together to our rented sedan to retrieve our backpacks. When we opened the car’s door, there was a cockroach fest inside. Our bags were covered with the critters, and they skittered across the floor mats and across all of our seats. There were no girly shrieks; we just grabbed our things, turned our bags inside out, got rid of the creatures and had a snack.

The sun was under heavy cloud cover, and it was chilly, so we spread out towels out in an area with the least amount of detritus and empty water bottles and soda cans. We got out our books and read until we were all a bit sandblasted and cold. My thumbs were numb.

We laughed about having to face the cockroaches in the car and were pleased to see that, without our food inside, they had retreated somewhere else in the vehicle.

We took lots of photos out the window on the way back, and Stephanie, our driver—because she has a Marshallese driver’s license—was kind enough to pull over several times so we could take touristy photos. Stephanie told us stories about some of her stays in other countries, and we enjoyed the late afternoon.

A few miles from the Asian market-car rental store, we realized it was getting dark and that our cockroach friends would return. Molly noticed them first, crawling up one of her legs.

We turned on all the lights we could find inside the car, and as the creatures began to invade us from the floorboards, we stomped our feet to make them retreat. I confess, there were a few girlie squeals as this point, and we urged Stephanie to drive faster.

Before the car had even come to a stop at the Asian market, we had already jumped out and grabbed our belongings. We were cracking up.

It had been a great, adventurous day.